Week 4: The Gathering - Showcase Your Skills

Week 4: The Gathering - Showcase Your Skills

It is important to learn how to do that while still showcasing your skills – which you will have to when the Trials come and you want to impress a Jedi Master and hopefully be chosen as a Padawan. So for this task we ask that you showcase a skill either through writing or imagery. And don't worry if you haven't quite mastered how to do that without boasting; there will be years still to practice.

Post your answer below either as an image or description by 11.59 pm on the 31st of May to earn 5 points.

Elesti would demonstrate her powers of negotiation and emotional intelligence by asking for a volunteer to provide her with an example of something that they felt made them feel irrationally angry. She would then ask open ended questions to try to learn more about their thought process and also so that the person themselves would be forced to articulate their thoughts. To try to get them to subtly restate their feelings in different ways, she would use a technique known as mirroring. This is where you respond to something someone said by repeating the last three words or key points back to them, phrased as a polite question (as if you didn’t quite understand but wish they’d explain further). She would then label their feelings by saying things like ‘it seems as though you are particularly angry about X, Y and Z’, hoping to create rapport. She might also try to gain further insight by deliberately mislabelling one of their emotions and forcing them to correct her. After she has gathered all the information she can through these techniques, she would begin to try to change the person’s mind with subtle questions that forced them to reframe their ideas. Ideally, she’d have got them to change their mind by the end but if not, she would have at least demonstrated her skill at obtaining and utilising information (and hopefully helped someone consider their problem from another angle).


For instance, if confronted by someone who has an illogical hatred for Ewoks, it might go something like:
“What would you say troubles you most about ewoks?”
“They’re just too fluffy.”
“Too fluffy?”
“Yes, they look ridiculous.”
“Ridiculous?”
“Yes. Like children’s toys. And they act so immature, too. Makes it worse.”
“It seems as though you resent ewoks for not taking matters seriously enough.”
“That’s right.”
“It seems like you wish the Jedi’s didn’t have anything to do with Ewoks at all.”
“No. No, I know they’re an important part of the intergalactic community.”
“An important part of the community?”
“Yes. I only wish they’d calm down a little.”
“Do you know other people who feel the same?”
“I know other people find them annoying….”
“Do you think if ewoks took things more seriously, you’d be able to get on with them better?”
“Yes.”
“Do you think it’s something the Jedi council should demand of them?”
“No, no.”
“Why not?”
“Seems like a silly thing to legislate for.”
“A silly thing?”
“Yes… and I suppose it’s my problem to overcome, not anyone else’s.”
“How about the issue with their fluffiness?”
“Again, I guess that’s my issue, not there’s. They can’t help how they were born. And really, it doesn’t do me any harm, does it?”
“That's right.”
“Well then. I suppose I’m fine with Ewoks.”

Kar’ta was never the person to really boast about his skills without prompting, he much preferred his actions to speak for him. Nevertheless, he is proud about his accomplishments. If you step into the room (or in the future, his office), you will find plaques of academic accomplishments on his favorite wall, tastefully arranged.

For his more physical skills, the boasts are more subtle, like a shimmering stone that can only be found at a certain depth on the ocean floor, a pressed flower from the highest peak he managed to climb, a necklace given to him by a local’s child after rescuing them from Stormtroopers, that sort of thing.

However, if you ask about the stories behind his keepsakes, be prepared to be regaled by them for a long time.

Lufta presented a healthy rose bush planted by her doorway, in full bloom, luxurious and fragrant, happy and joyous -- in the middle of winter. No greenhouse, no anything of 'built' materials, but the rose was surrounded, protected, nurtured and loved by and with Lufta's wholeness with the Force. (This was after asking the rose bush if she may do this.)

Living on top of the trees, April Zaurak was incredibly skilled in climbing. She could climb trees the best, but could technically climb pretty much anything. April had wings, so perhaps the question could be raised of why she would even need to climb if she could fly. However, climbing is still an incredibly important skill as you can't always fly in tight spaces, or dangerous places where you don't want your wings to get damaged.

If she had to pick one time that this skill came into handy, it would be during one of the trials when they had to climb a makeshift cliff without use of their powers so she wasn't allowed to use her wings. Luckily, April had had so much experience with climbing that she was easily able to scale the mountain in three minutes flat. She had almost tied with someone else, but April managed to pull herself to the top first and grab the trophy they had placed up there.

Lyra Dreamsinger has been working on the ability to heal those who are afflicted with mental pain or anguish. She is becoming efficient at projecting warm feelings, scent, and a beautiful song into their minds.

Lyra sits across from her teacher. She asks her to describe the most peaceful place she can imagine.. Lyra makes eye contact with her teacher, and focuses on feelings of peace and tranquility, a beautiful meadow, warm sunlight, bird song, and the scents of Honeysuckle and Lavender. She then visualizes these images, scents, and sounds turning into a light and connecting Lyra's thoughts with her teacher's, so her teacher can experience what Lyra is envisioning.

She knows she's successful when can she feel her teacher relax.

Those of you who know me might expect me to say something about my flying speed - but raw speed without finesse does not a Jedi make!

Instead, the skill I want to showcase is the ability to solve puzzles: especially when the puzzles involve deciphering things written in an obscure way. This can include riddles and logic puzzles ("There are twelve balls, one of which doesn't weigh the same as the other eleven. How can you find the odd ball using three weighings of a balance?") as well as interpreting things written in cryptic ways, or in foreign languages. Even though universal translators may make the skill of speaking foreign languages obsolete: really understanding what others mean can still be useful nonetheless!

Anburr's skill include sensing when someone need help before person know need help. She also intelligent and good at make decisions. She natural leader but not brag. She let people find her natural leader on own.

Thank you Ivey for my siggy and avatar!

Though possessing a rather small skillset, I’sa is highly skilled at what she is good at. Her overwhelming tenacity is a characteristic seen in very few and is a characteristic that must be taken into account. I’sa has never once backed down from a fight and, though some Jedi may see this as pride or recklessness, it has also lead to the concoction of ingenious plans and ideas, only created because of the time and effort I’sa is willing to put into the Jedi. Combining this with her highly visionary worldview creates in a person the aptitude for a great sense of justice and carrying it out.

Though this is a quality that can only be seen after really getting to know I’sa, a form of her perseverance can be seen through her weaponry skills. When she initially joined as a youngling, I’sa was one of the worst of the bunch at maneuvering weapons. When she realized this, she began to practice the skills that she was bad at endlessly and went to bed crying because of just how badly it had hurt to be hit by the practice droids. I’sa spent years committing to her weaponry and vowed to become an excellent blade-wielder. Her skill in weaponry today is remarkable, especially for a youngling of her age and, while she has fallen slightly behind in her hand-to-hand combat, her knowledge and capabilities with blasters, staffs, and swords makes up for this tenfold. 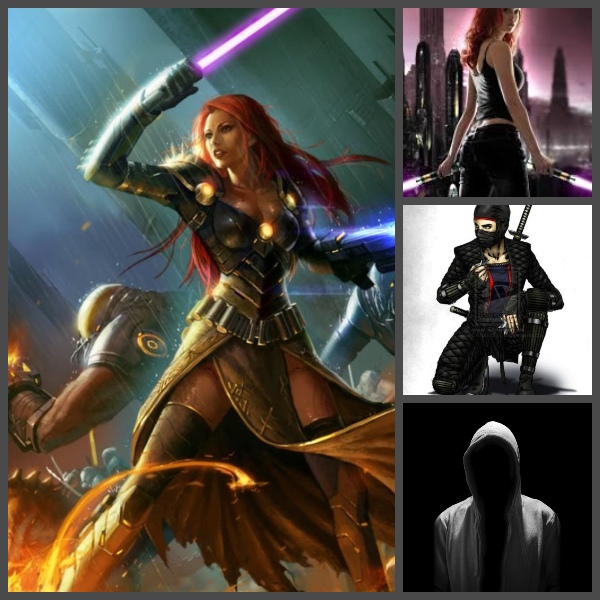 Though she had been trying hard to hide her prowess (especially since 'the incident'), Ky'lia was an excellent fighter who prided herself on her ability to melt into the shadows and pounce when the enemy least expected it. Today she was finally able to show her full potential to the watching Masters. She just hoped that one of them had the sense to take her on as his padawan.