Another area your education will certainly include is technical and mechanical skills. A jedi has to build their own lightsaber and may also be called upon to make repairs on the spot when on a mission. It is important to understand how these things work. You are all a bit young still though to deal with the engines of a spaceship to get it moving again. Therefore we will start with a general knowledge of what a spaceship has to include and how to recognize the various areas.
For this task you must draw a plan of a spaceship: It must include an area for the pilots to steer the ship, something to drive the ship forward, an area for eating, an area for sleeping, but it can include so many more areas. If you do not wish to draw, you may describe the spaceship and its areas instead.

Kar’ta spaceship is oval shaped with a small half-bubble at the top, where the “command center” is and where the pilot and one more person can sit. It has an impenetrable window so the flyers can see the way forward, which can close with shutters in the event of the attack or long rides in hyperspace.

The main, oval part of the ship houses several rooms. At the front, under the command center, is the weapon’s room, where a gunner can sit if there is additional need of more precise shooting, all the ship’s weaponry, automated or otherwise, and general storage area for the weapons. By the entrance to the room, there is a ladder to the command center with a long hallway stretching to the end of the ship, where there is an engine that propels the ship forward, together with the hyperspace engine.

There are four rooms to the sides of the hallway, two on the right and two on the left. On the right are the sleeping quarters, although if there is only one person in the ship, one of the bedrooms can be substituted for more storage space or training area. To the left, closer to the ladder, is a kitchen, a very simple one with a cooking space, food storage space and waste disposal. The other room consists of washing facilities.

On the bottom of the ship, you have landing gear, doors to exit the ship and small miscellaneous space for whatever a Jedi Apprentice might need. 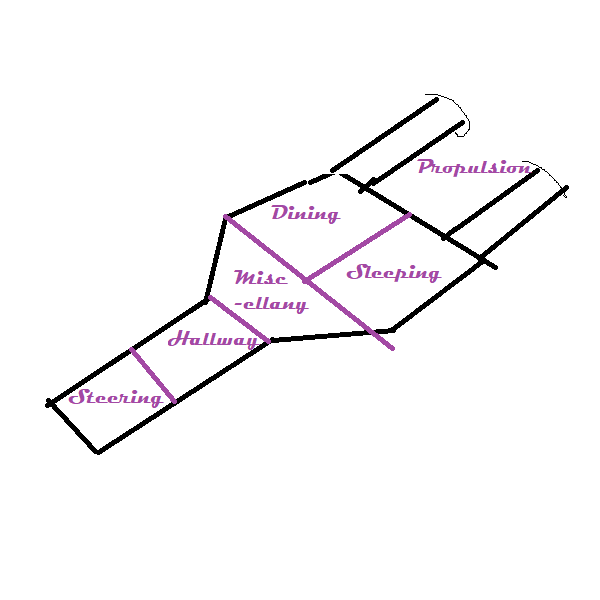 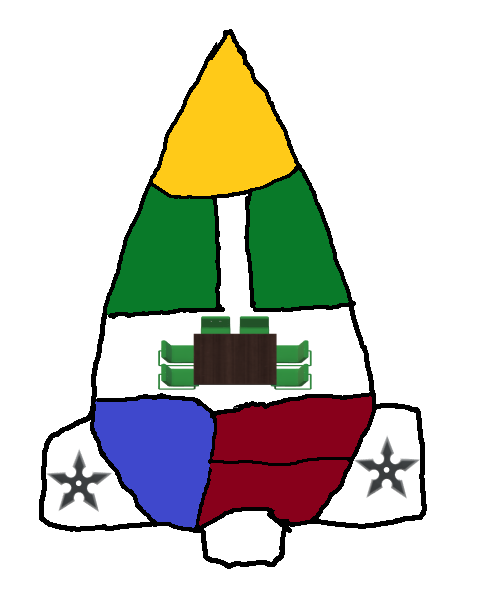 The yellow block is strictly the control room where the spacecraft is piloted from. The green blocks are for storing items, lavatories, and suiting up when the spacecraft is docking. The white part in the middle is used as the meeting room where all the planning takes place as well as a general meeting room in case any guests are on board and business needs to be discussed. It is also used as a dining room for meals. The blue part is the kitchen where all meals are prepared. The two red parts are the sleeping quarters. The white parts on either side of the back are the wings complete with stars on them and the white part out the back is the main engine where the ship is propelled from.

Image shows a horizontally elliptical/oval-shaped space craft with a circular Observation deck at the top and Propulsion coming from the bottom just beneath a Storage and Mechanics room. Above that are two major floors, both of which have Sleeping areas on the far left side and have access to the Pilot area on far right for steering and general control. The sizable common areas include the Work and Recreation stations on the lower level with Food and Lounge located on the upper level.

"—I have watched you grow and I've stood in your shadow,
I've never walked away. I hung the stars and I hold your heart,
so don't ever be afraid."
Top 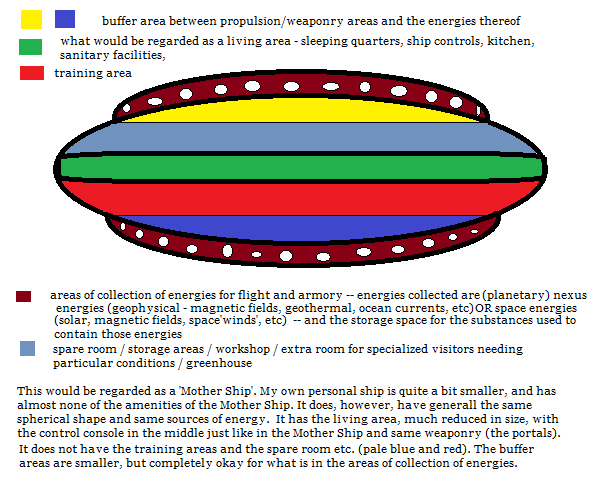 The 'engine' area is in the brown areas, both top and bottom. The methods of propulsion and weaponry are not detailed - deliberately.

Ky'lia is very proud of her ship, which she built from scraps and spare parts she found. It may not look pretty, but it gets the job done! 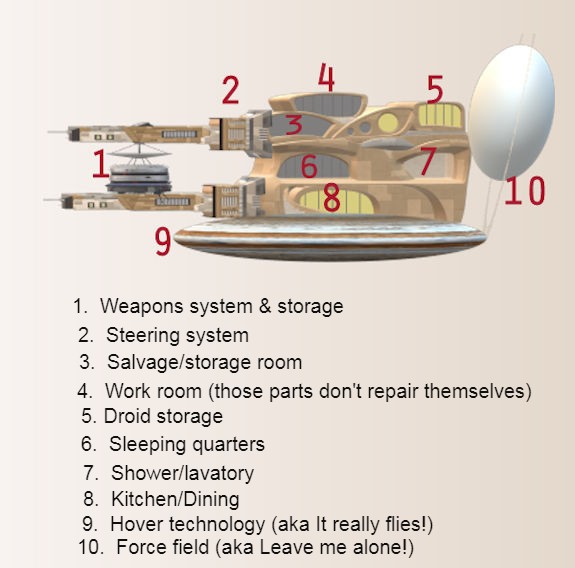 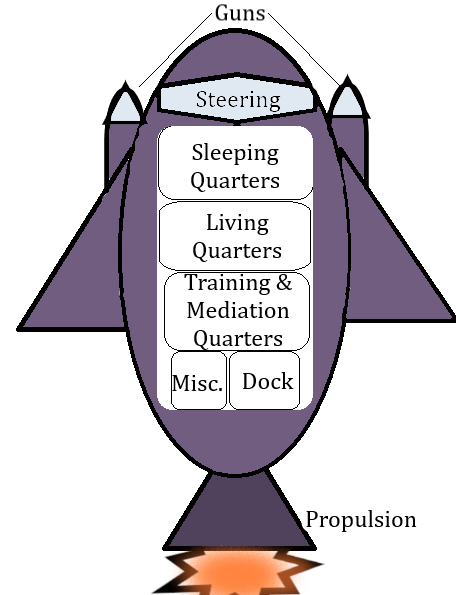 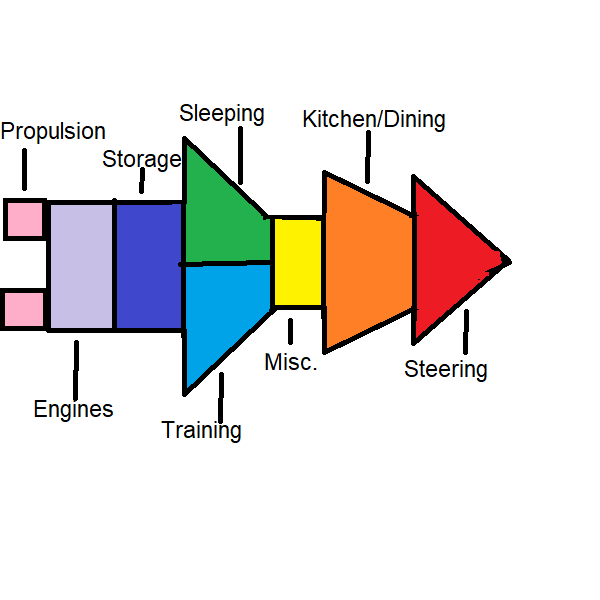 There are propulsion units and an engine area, so the ship can get off the ground. There is a storage area for all of our supplies. A training area, so we can continue to hone our skills and keep in shape. A sleeping area, so we can get some rest. A miscellaneous area, that includes bathrooms (with showers), and an area to relax after a long mission or a day of training. A kitchen and dining room to prepare and eat meals. The final area is the steering area, for the pilots to steer the ship.
Top Notes: This particular ship is not intended to be used in any form of combat. It is meant to be used as a portable home for extended periods of time.
Top 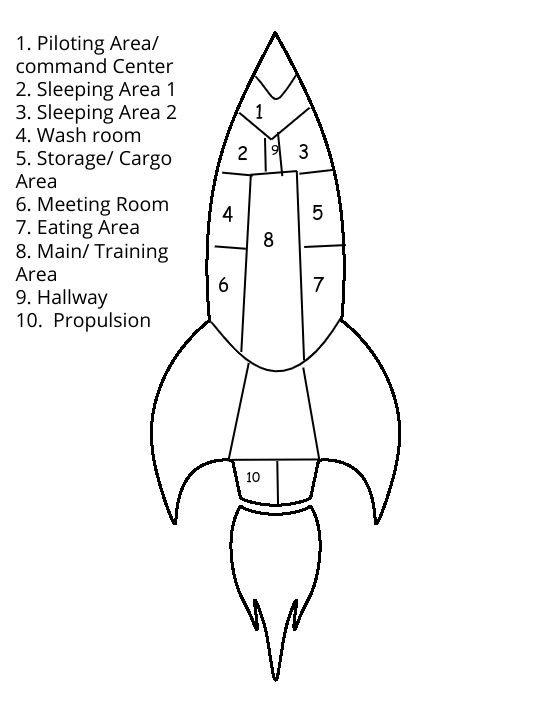 Thank you Ivey for my siggy and avatar! 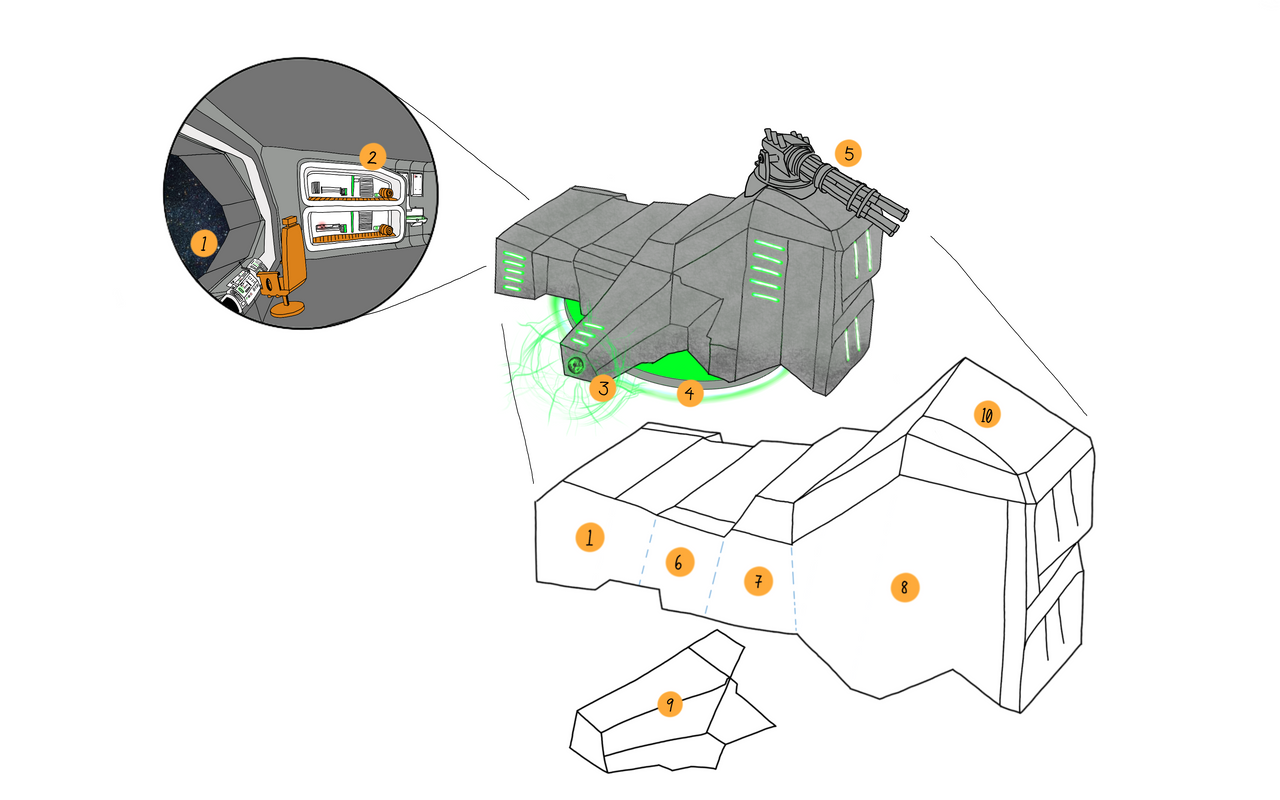 1- cockpit; where the ship is controlled including its weapons, flying, and docking, weapons such as blasters and knives are kept here as well, there is also a Dejarik table that can be turned off to seat a small meeting area

2- sleeping quarters, located inside the cockpit to reduce needed space and also allows for I’sa to make sure that the ship is operating quickly while she sleeps

3- charger port; this machinery sucks energy from space into a vacuum contained within the spaceship. This energy is used to power I’sa’s droid, Argonaut, as well as the ship’s defensive and offensive mechanisms. The charger port also works to “suck in” and store energy when someone is firing shots at I’sa, preventing the shot from damaging the ship. However, this only works when shots are fired around the hole in the wing of the charger port (around a 2 meter radius around the hole) and does not protect the whole ship.

4- hover and shield technology; the hover mechanism allows the ship to guide along the surface of a planet or moon and lets I’sa travel on planets without renting or buying a bike. The shield technology creates a bubble around the ship that helps reduce the impact of blasters and other laser technology that could be shot at the ship, though it does little to deflect larger and stronger blasts.

6- supply area; this area contains things such as a food cooling space, a kitchen, a wardrobe, and a bath and allows I’sa to go on longer journeys without external assistance.

7- power center; this is where both I’sa’s droid, Argonaut, and the whole ship are powered and charged. Though I’sa’s ship itself is run on fuel, Argonaut and the laser cannons are run via the charger port.

10- laser cannon storage; this area stores energy that the laser cannon uses. Though the energy comes from the charger port, it must be manually filled with energy after use. If the energy runs out halfway through battle, I’sa must manually fill the container back up with energy before it works again. Filling it completely takes around an hour with shorter increments for less energy. This area also stores the laser cannon itself. The laser cannon has been built so that it folds into the ship if I’sa is on a diplomatic mission so that foul play is not suspected or doesn’t seem as imminent. The back of this area is used as a propulsion mechanism.

(Also, when I say “when I’sa goes on missions” or “when I’sa is in battle” that is more about her preparing her ship for the prospective future as a Jedi than it is about her going on missions now as a youngling)

All ansmerians are assigned a small ship for their peace bringing duties. Painted in the characteristic lavender colour, they are built for speed and durability rather than comfort. Comprising an oval shaped craft with pointed prow and stern, they are fitted with a light weight engine (occupying the base of the craft, under the floor of the living area) intended to operate unobtrusively while providing the pilot with agile handling when needed. The cockpit is found in the roof of the craft, rather than the front so it is quite cramped, meaning that many people choose to make extensive use of the autopilot function rather than squishing up there for extended periods. There is a very small weapons array in the nose of the ship that can be activated from the cockpit, though there are so many fail-safes to stop someone from using it accidentally or in haste that it really isn’t the most effective defence.
In the habitable portion of the ship, most of the space is taken up by a conference table and chairs that can be adapted to many anatomical configurations (including adaptable life support systems), meaning an Ansmerian always has the facilities to conduct peace talks with any number of different lifeforms simultaneously. A small bunk, washroom and food preparation area are hidden behind panels in the wall so as not to interfere with the space’s key function. Large screens take up the rest of the wall space so that vast amounts of information can be displayed there at any one time, making it easy to pass a journey in a productive way. 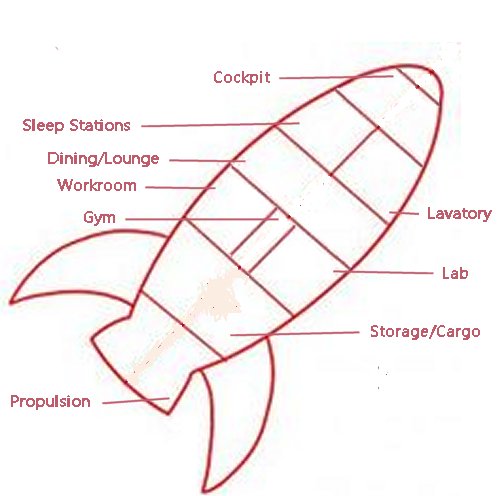