This was her favorite time of day, the hour before the night crept in. Sitting on the back porch on her comfortable deck chair, tonight, a tall glass of sweet tea in her hand and the warmth from the outdoor fireplace caressing her legs, Felicia was enjoying the last days of her summer vacation.

The mornings and nights have begun to have a bit of chill in the air even though the afternoons were warm enough to stroll down to the beach for a couple of hours. It had been an interesting summer, though the beginning she could have lived without. But thankfully the health issue with a member of her family is now in the past and normalcy has finally settled in. Having the nieces and nephews come up to the Maine house for their vacations was always interesting, the old wood front door seemed to becoming a revolving door what with all the comings and going. But again, the laughter and fun made up for it. It was a good summer.

Now it was time for get back to work. Her bags were packed and being placed in her car waiting for her to drive to the hanger where her father’s jet was waiting to fly her back to London. As she did every year, she spent a good part of the summer at her father’s Maine beach house before returning back to HOL. Never liking to apparate over the “Pond” she would always take the jet back to London and then travel by train to the school.

After taking one last sip of her sweet tea, she placed it on the small table by her chair and slowly stood up and walked over to the railing to take one final look of the ocean. She was going to miss this place, but it was time to go.

Felicia turned to the face the old house and sighed as she leaned back on the railing. With a heavy heart she walked to the door and entered the kitchen where she say her carryon bag waiting for her on the counter.

“You’ll be back soon enough,” said a deep voice from the other side of the room. She turned and smiled at her father.

“I know, but it’s always sad to leave the summer… and the family behind,” Felicia answered as she walked over to him. “But it’s another school year and time to go.”

“Here’s your case,” her father said as he handed the luggage to her and gave her a kiss on the cheek. “The car is waiting to take you to the plane. Now be off, you know I hate goodbyes as much as you do.”

Felicia took the luggage and returned a kiss to his cheek.

“Now behave yourself while I’m gone and don’t get into any trouble,” she called back as she headed to the front door.

An hour later Felicia found sitting in the window seat of the jet being handed a lovely cup of hot tea and a plate of scones and jam being placed on the small table in front of her. The roar of the engines let her know they would be taking off shortly. As she took a sip of the tea she also opened up her carryon to take a sheet of parchment out from the top. 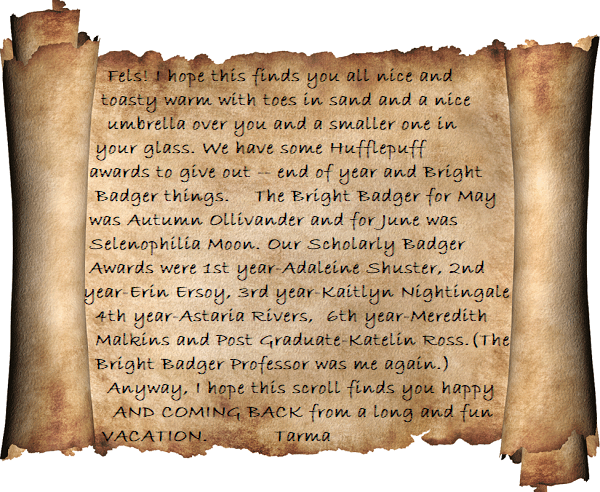 The handwriting was familiar, as was the information written upon it. Last term was quite unsettling at times and a lot of awards were not handed out. Luckily, Tarma was on top of things and kept a careful check of points. The parchment she was reading now was the update of the last few months of the Spring Term. Early in the week Felicia had sent a post back to Tarma to post the awards so all could see.