You feel slightly bad for the next tomb raiders that will try and take the treasure away from the dig site. A young wizard stops you in your path towards Marrow and drags you by the arm to the western chamber where there is a pile of shiny treasure waiting to be catalogued. He asks you to help him describe each treasure, what curses might be upon them and when and where it was found.

You can either write the itemized list in which case the text must be at least 80 words long or you can make a collage. In either case, you need to include at least five pieces of treasure that you found and what creative curses have been put on each. All standard HOL rules apply. 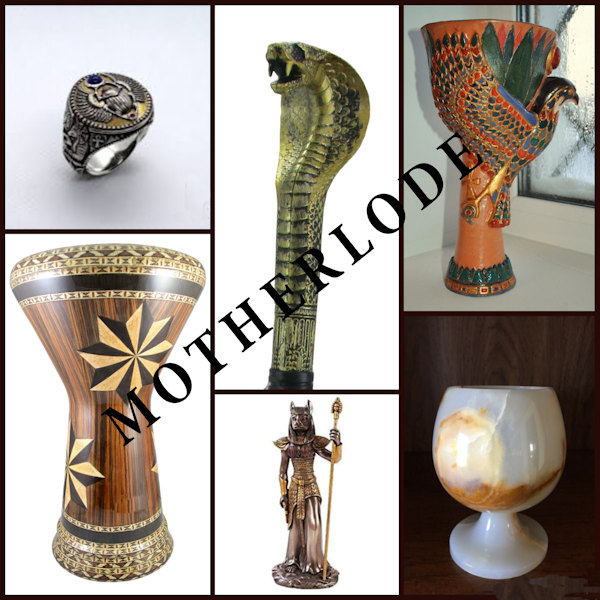 As you can see, it was quite the haul! Of course, I wouldn't dare keep any of it for myself *shifty eyes*, so here is an itemized list of what I've found and the curses attached to each.

1. Scarab ring-"Velatos ad Mortem" which translates as "Death to the Wearer". It is believed to be the same curse that Lord Voldemort placed on Marvelo Gaunt's ring when he turned it into a Horcrux. The curse is designed to kill instantly anyone who attempts to wear the ring. Pretty clever!

2. Cobra Staff-"Vulnus Mortiferum"-Also known as the Deadly Bite Curse, this particular curse causes the snake at the end of the staff to come alive and bite anyone who attempted to wield it. The venom from the bite is believed to be slow-acting, promising a most agonizing death. Not a pleasant thought, is it?!

3. Votive Bowl-Floating Eye Curse, which seems rather appropriate given that this ornate bowl was used in rituals honoring the gods. Surely, a god wouldn't want anyone else to use the vessel meant to honor them. The curse, as the name would indicate, conjures a large floating eye above an object. This eye exudes a red aura. and has the power to repel and knock back any who dare to approach it.

4. Darbuka Drum-Ear Shriveling Curse, which makes sense seeing that this goblet drum was used presumably in ceremonies honoring the gods (as well as for pure entertainment's sake). These Egyptian gods are proving quite the jealous lot, and if anyone attempted to play this drum, their ears would literally shrivel up into nothing.

5. Bastet Statue-Jelly Fingers Curse, which causes the fingers of anyone unfortunate enough to touch this object to become jelly-like. Bastet was a protection goddess, and I suppose that it would stand to reason that the owner of this statue wanted to keep that protection for themselves!

6. Drinking Goblet-"Venenum Celia", which translates roughly to "poison brew. This is a particularly nasty curse, as it causes any liquid to be poured into the vessel to turn instantly poisonous, almost guaranteeing certain death to anyone unfortunate enough to drink from it.

I am happy to report that all curses were able to be reversed! Go team!

Hoots and beans go to Emily Spencer for her lovely submission!