Murmuring disapprovingly about your fingers, which are stained from the tracing charcoal, you feel yourself being grabbed by the shoulders. Squeaking in fright, the person turns you around and you find yourself face to face with no other than Stephanie Marrow.

She looks a little manic with her eyes wide open and as around as galleons. Marrow informs you that for the past week or so, the treasure from the dig site had gone missing. Muggle tomb raiders are the main suspects. Marrow orders you to go with some squibs that act as messengers between wizarding staff and Muggle citizens to make a Muggle trap that would either capture the tomb raiders or prevent them from taking the treasure.

Your task is to make a trap out of household or other items you can find in your area. Please, also include a sentence or two of explanation how the trap works. All HOL rules apply. 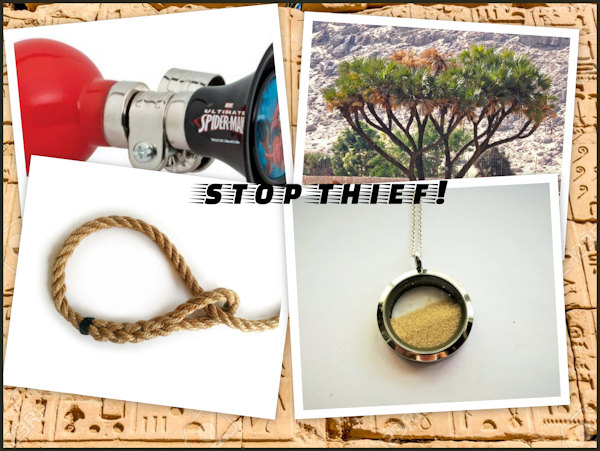 Despite appearances, this is not just a bunch of random items. Allow me to explain how the trap works:

A rather heavy pendulum is filled with sand and suspended from a tree branch via rope. A typical bicycle horn is also attached via rope to the tree. (Yes, I know it is a Spiderman air horn; the muggle I borrowed it from said his son was into Spiderman-whatever that is.) Via some intricate knotting (which thankfully I did not have to personally do), it is rigged so that when the trap is sprung, the horn gives off a loud noise, alerting us to the intruder. Said intruder should be knocked out by the sand-filled pendulum swinging against their head. Here's hoping that we never actually have to see it in action.

Hoots and beans go to Emily Spencer for her awesome submission!