World-Building 1: Map it Out

World-Building 1: Map it Out

I’m sure at some point you’ve opened a book to find a map (or several) at the front. These can be quite useful when trying to orientate yourself while reading, working out just how far the protagonists have gotten or how much danger they’re in from an approaching army. They can also be very useful for a writer. Maps allow you to get a real sense of the country (or space) outside of the immediate experience of your characters: they can also help you keep things consistent in terms of distances and dangers the landscape might pose.

That’s not to say you need to start out with every gully, hillock or star committed to the page. Just like with any aspect of your story, your map has to evolve from the bare bones to a fully-fledged place.

For this prompt, we’re asking you to do a rough sketch map of a world. It could be of the entire planet (or galaxy), a continent, a country, a city or even just a small area. Try to mark some interesting features like towns, mountains, rivers or dragon inhabited caves; it’s okay to leave parts of it blank though, you’ll probably work out what’s there later on. If you’ve already done the first prompt over on Quill and Ink, now is a good chance to visualise that seed idea you’ve already written about.

Your work needs to be original: taking something off the internet and claiming it as your own is plagiarism. Remember to keep everything HOL appropriate, adhering to all HOL rules, and please keep your submissions 600x600 pixels or smaller. Please also include a short description of your image.

You'll earn 20 beans for completing this prompt as well as it counting towards the chance to snag our shiny Ink Splatters Award.

Re: World-Building 1: Map it Out 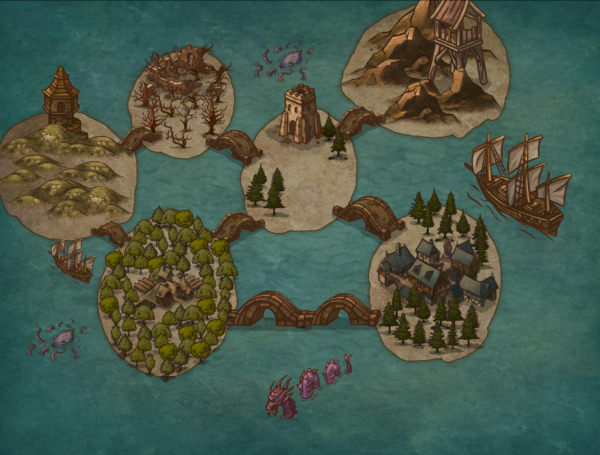 A small group of islands which are just a sample size of the many tiny islands of Tisle and how they're connected is surrounded by brilliant blue water with sea serpents/giant squid hanging out around it. A large and small ship float outside the islands. One island is covered in little trees with a few small houses in the center. One has pine trees all over it with larger houses in the center. Another has hills and a tower while another has a watchtower and small mountains. Of the last two pictured, one has dead trees and the remnants of another building that once existed there while the other has another tower of a different design and a few pines here and there. The islands are connected by sturdy stone bridges.
(made using Inkarnate - a map-making site)

Re: World-Building 1: Map it Out 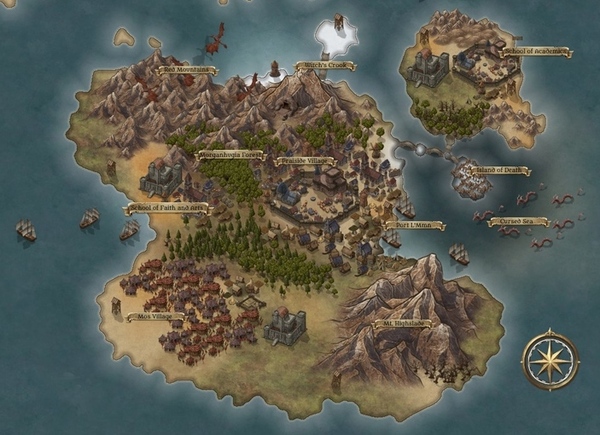 The Isles of Calamite are a set of islands strung together by bridges. The Isles are inhabited with a people group named "Calamites," or informally "Reds" due to their bright red hair. Calamites mostly live in Praiside Village, a place of dwelling that is located on the Isles of Calamite's central island. Residents of Praiside Village heavily focus on perfection and students are trained to have athletic prowess and be skilled and knowledgeable in the arts and sciences. Residents of Praiside Village also operate under a theocratic monarchy, the royal family of which live in a castle central to the village. As children of the village grow up, they are indoctrinated through the teachings of the School of Faith and Arts. This school is where students go in their morning lessons and, at noon, they are made to run to the other side of the Isles to the School of Academics where they spend the rest of their day. Students who fail to meet Praiside standards of education are sent off to Mos Village, a more primitive area full of Praiside Village's rejects. A key feature of Mos Village is its library as, if students who are excommunicated are able to 'redeem' themselves, they can be accepted back into Praiside.

Across the mainland, there are two sets of mountain ranges. The first are the Red Mountains, known for the red dragons that roam the area. Because of these dragons, most villagers stay away from this mountain range due to fear of being eaten. Just off of this mountain range is a small outcrop of land on which sits a witch's tower. This tower remains unknown to most, if not all, villagers. The witch who resides in the tower has cast a spell on the area around her to remain invisible to people who come across her dwelling place but, occasionally one or two will come across the tower and be able to see it. The white ground around the witch is due to the casting of this spell. It is also thought that the witch had previously lived on the Island of Death-- the current graveyard for all of the Isle's inhabitants-- and that is the reason why the island and the area around it have become white. The second mountain is Mt. Highslade, where seldom anyone goes. The top of this mountain marks the highest place in the Isle of Calamite and is usually shrouded in clouds. There are also a few more smaller mountains on the island for the School of Academics which are occasionally used for student training.

On the entire island, there is only one places where boats can dock, Port L'Mmn, which can host larger ships, usually exporting and importing cargo out of Praiside Village. Praiside Village holds a fair amount of economic and governmental power due to its students being some of the most athletically, intellectually, and artistically competitive ones in the world. Many children who grow up in the Village go off-land and reside in Venturia, a land closely allied with the Isles of Calamite. When these villagers birth a child, they then send them back to the Isles to go through the same training that they did. This allows for the islands to be repopulated and teaches older children to be responsible for the younger children of the village. It also allows for a large influx of students to the island as many parents want to send their children to the prestigious schools, which host pre-school up until college and beyond.

The body of water that surrounds the Isles has been named the "Cursed Sea" and holds much aquatic life. The aforementioned dragons also inhabit these waters but are able to tuck their large wings so close to their bodies that they resemble sea serpents. Many of these dragons inhabit the waters east of the mainland.
(Made using Inkarnate)