Have you ever wanted to take a tour of Wonderland? Embark on a road trip down the Yellow Brick Road? How about going backpacking in Middle Earth?

This month we’d like to combine our love of travel with our love of books. Please create the cover of a travel brochure for a fictional world of your choice. You should try and include a range of images and text, maybe even tease what people might find inside. Your graphic should be original (your own work), no more than 600 x 600 pixels and entirely HOL appropriate. Please also include a short description of your image. 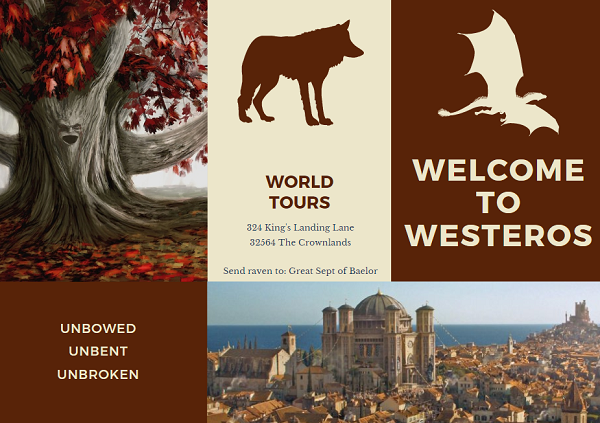 This travel brochure image for Westeros (Song of Ice and Fire book series by George R. R. Martin) is divided into five parts. Upper three parts take up 2/3 of an image and lower two the rest. First image on the left is of weirwood in the godswood of Winterfell. The middle part has some information. It has a beige background with dark red lettering. First, there is an image of the wolf, representing House Stark, then below it is text "World Tours" in bold, uppercase letters. Below that is the address of the travel agency and instructions on where to send a raven. Third upper part of the image is on a dark red background with beige lettering saying "Welcome to Westeros" with a dragon above it.

Lower left part of the image has words "Unbowed, Unbent, Unbroken" which is actually a motto of House Martell, but I think it applies to the world at large as well. On the right is an image of King's Landing, the largest city and where royalty lives.