Have you signed up for your Wizarding Passport yet? On September 1, Wizarding World/Pottermore announced that they will be giving the Sorting Hat ceremony a makeover with a new look and feel. A relaunch date has yet to be announced.

Now I’m a Pottermore Gryffindor and was very comfortable with that so no one was more surprised then me when I was sorted into HOL Ravenclaw. At the time, I felt like a Griffin – front legs and head of an eagle but the body and hind legs of a lion!

But I got over it and I guess I’ll get sorted yet again.

A "Cassie Sig" is priceless - thank you so much!
Tags:
Pottermore
Top

I actually have barely explored Pottermore yet, only a couple of years ago when it first popped up. The revamp of the Sorting Hat might be a good reason to check it out again. I felt that the first edition, the questions were a little too easy to get the house that you *wanted* instead of actually were... I think there was one back in the day on MuggleNet that was really good. Does anyone else remember that?
Top

This is what I think I know about Pottermore's Sorting Hat Quiz:

I remember when the Pottermore Sorting Hat quiz was new, and while many agreed with the House they were sorted into, many did not. Some very analytical individuals took each of the questions and, based on the responses on several thousand people who had taken the quiz and the Houses they were sorted into, it appeared that some of the questions/responses didn't match up well to the individual Houses, but most did. For the most part, those questions have since been removed. Based on the opinions of these analytical folks, if you take the Sorting Hat quiz about 3 or 4 times and keep getting the same House, and you most likely will, you have been correctly sorted, based on Pottermore's criteria.

They did find some who appear to be a mix of 2 Houses, but it's unusual.

I've got my wizarding passport; I think I signed up for it a few months ago. On the older site, I was sorted into Slytherin (whether not was accurate or I was screwing with the hat, I can't remember

), but on the new site, I tried to answer honestly and got Ravenclaw, which really surprised me because I've never placed myself there and others haven't either. I've taken many sorting hat quizzes before and I get various results.

There are also a lot of other cool features to the site. I've been given a wand already: Hawthorn wood with a dragon heartstring core, 12 ½" and unbending flexibility. I just took the Patronus test as well and apparently, it's a hummingbird 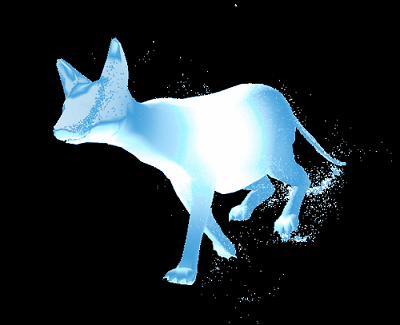 image shows a sphinx cat patronus, coloured in blues and silvery-white walking along - shown against a black background

This time was Sorted into Gryffindor.

I can't wait to be sorted again. I'll let you guys know what I get when I have finished the test and it comes out again. My guess would be Slytherin since every time since I been sort the first time in the old old official sites that was taken down long time ago I have always been Slytherin. However I'm not as cold blooded and mean like I once was so who knows maybe things have changed.
Top

I have done the Sorting Hat test on Pottermore serval times and each time I get sorted into a different house. The first time I took it, I was a Hufflepuff, but here I'm a Gryffindor. I think that I identify more with Hufflepuff more though.

The new Sorting Hat quiz is out. The questions haven't changed, with the exception of selecting a pet.

I had a really difficult time maneuvering through some of the questions on the app because of how we were supposed to turn our phones, but at least I was still sorted into the usual house. I always get a new wand and patronus, which I really don't like.

Similar to Lucy, I did the Sorting Hat several times, each time with different results, which I think just proves how unreliable the sorting there is. I always thought that, when Pottermore still had houses and point-earning, people were sorted so that the house numbers were as even as possible.

My first time I got Gryffindor, second Hufflepuff I think, and now Ravenclaw. Since the sortings were quite apart, it was not just me answering differently as by the time I took the next sorting, I had forgotten most of the questions.

Interestingly enough, my Patronus is still the same.

I took it once on my friend's account, and I got Gryffindor, I have yet to get my wizarding passport though, I didn't know that it would have a different answer every time.
Top

I have bearly used Pottermore but that sounds really cool. I think having a different sorting hat must be fun because I myself have taken the quiz over and over again. I can't wait to try it out. Thanks for the heads up.
Top

I have taken the Pottermore quiz on multiple accounts, just to be triple sure i was sorted into the right house and i got Hufflepuff every time. I 100% relate with Hufflepuff in every aspect of the way. If them revamping the ceremony changes my house i might cry

every 5 years i re do it to make sure im still in my house i always got gryfindor exept the last time i got hufflepuff(nothing wrong with them i love them!) but i re did it this year and i was Gryfindor in HOL and pottermore.
Top

I take the quiz once every year. So far, I’ve always gotten Slytherin, and I also got Slytherin on HOL.
Top

I actually went onto Pottermore a few times before the update and was placed in Slytherin many times, after the update when I tried it there were different questions than what I was previously asked so I was afraid that I would be put in some other house than Slytherin but I still ended up in Slytherin the end.
Top

I've had a few accounts for Pottermore, but I lost one, and the second one glitched and everything got mixed up. Anyways, I finally got everything right now, have been sorted into the right house, gotten my wand and patronus (though I think it could be more accurate). The sad part is, I'm allergic to my wand wood. Ash. Not terribly allergic, but still, not fun. Oh well, it's a wand, I won't complain!
Top

I've never been sorted into another house .... I took several quiz here and there, and the house always be Ravenclaw

I have about three accounts on Pottermore, and all of them are Ravenclaw. I did a kind of sorting which you can get the percentage of each house. Well, come close to Ravenclaw, there is Hufflepuff. I think if I don't get Ravenclaw then it would be Hufflepuff~