Here is where you can post art/writing from your classes that you are particularly proud of! They must be YOUR own original work. Let us know what class you took and what the nature of the assignment was!

Please note: NO PUZZLE SOLUTIONS MAY BE POSTED HERE! If you took my puzzle class and created a puzzle you may post the puzzle (WITHOUT ANSWERS) here.

I'll start! In the Spring 2018 term I took Prof. Dario's Transfiguration class and for one of the creative assignments we had to illustrate a Vanishment or Conjuration spell. I chose Aguamenti and this is the result:

I wrote the following essay on my final for Dario's Transfiguration class several years back (I took it before he was known as Professor Brighton) and it's still one of my favorites.

As I'm sure you're aware, the new Human Transfiguration spell known as "Mental Duplication" has made major headlines in Transfiguration Today for its ease to cast and its ability to effect precise, detailed change in the target. To transfigure yourself under Mental Duplication, all you need to is think carefully about the exact physical details of the person you wish to transfigure yourself into (a celebrity or maybe an altered version of yourself) while waving your wand in a downward motion, so the direction of the tip of your wand moves from the top of your head to the bottom of your feet. However, the spell is only recommended to be used for short periods of time at once. This is because holding the spell requires twice your usual amount of magical energy: a full portion of magic is required to keep up the illusion in addition to the portion used to go about your daily activities. Therefore, keeping Mental Duplication up for a full waking day of 16 hours is the magical equivalent of working a full day, pulling an all-nighter, and then spending another eight hours awake. Similarly, using the spell when asleep would cancel out the restorative effects of the sleep, making it exactly as if you were awake the entire time.

Before now, these side effects were not well known because most witches and wizards have no real reason to look any different than they already do: here in the Wizarding world, people's appearance is not considered to matter nearly as much as what people can do and whom they know. The small handful of wizards who are actually obsessed with their own appearance are generally ridiculed and looked down on (see Gilderoy Lockhart for a prime example).

This is why the epidemic of Mental Duplication-induced magical exhaustion at Hogwarts was fairly unexpected (and left Slytherin mostly unscathed). Nearly all cases followed the same pattern: a Muggleborn student would discover how easy the spell was to cast, observe the effects, and like the way they looked so much that they would "forget" to cast the counterspell, living under the effects 24/7 until they passed out in classrooms, their dorms, the Great Hall, or, in one notorious case, on the Quidditch pitch (the Seeker in question, having thought the appearance of Viktor Krum would improve his Seeking skills, had collapsed to the ground a mere six inches from the Golden Snitch, costing his team the match). Upon interrogation, it was determined that most of the time, the Muggleborn in question wanted to transform himself or herself into a celebrity (except for the one case previously mentioned, it was a celebrity from the Muggle world, which went completely unrecognized by non-Muggleborn students.) The remaining cases were even more frivolous: the Muggleborn in question would have internalized prejudices about physical appearance from the Muggle world (which apparently views people as being subhuman if certain body parts are the wrong shape or colour) and believed that the most important thing for them to do was to appear a specific way, which would be more favourable under those Muggle prejudices (which, as previously mentioned, are irrelevant in the Wizarding world).

Therefore, it should be stressed that "Mental Duplication" is not to be held for a period over five minutes. If someone insists on holding their alternate image for longer, they should be told to rest and relax in place while maintaining the spell so they only need to use their usual amount of magical energy. Finally, if you see someone who's been on this spell for a long time and are oblivious to the amount of magical energy they're using, and especially if that person is asleep while still under the spell, CAST THE COUNTERCURSE (Reparifarge) TO ALLOW THE POOR STUDENT TO RECLAIM HIS OR HER MAGICAL ENERGY!

This term I took Gail Allen's Survival class. It was very interesting! For one of the assignments, we were to make a shelter (it could be a small scale one) and I made this one over the other part of the assignment which was making a cot, and I'm pretty proud of it! 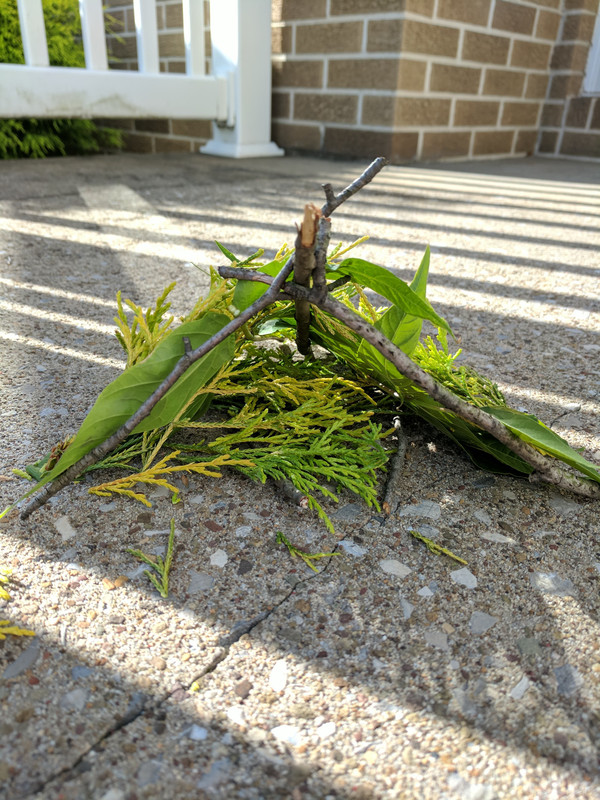 One thing that I'm definitely proud of is this graphic that I made for the class HOL 101:

The assignment was to design a banner for your house's quidditch team so I, as a Gryffindor, made a Gryffindor banner. I took some inspiration from Dean Thomas' "Potter for President" banner in book one and how Hermione had cast a spell on it so that it would change colors and upped that a little by charming the banner to make it animated

Return to “The Scrapbook”