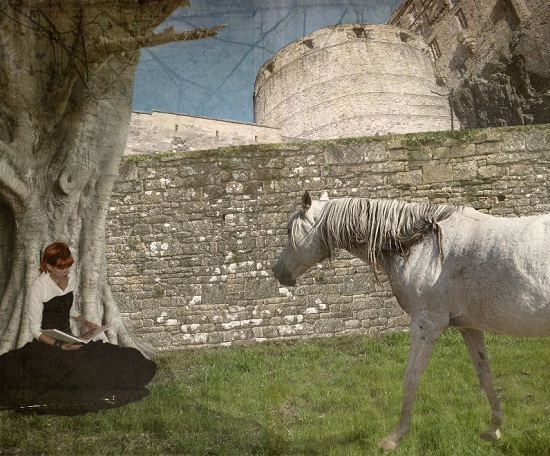 Graphic shows photograph of woman sitting and leaning against a tree, reading a book. She has deep red hair and wears a long green dress or tunic, which has white upper bodice and long white sleeves. The tree is in a paddock which has stone walls. In the background, on the other side of the wall, are what appear to be buildings of a castle. Approaching the woman is a thin white (flea-bit) horse - it has a tangled mane. - by aranov

In these chapters we meet Aerin. "Aerin is an unsatisfactory princess—she isn’t beautiful, she isn’t accomplished, she has a dubious dead mother who was probably a witch, and she managed to give herself a bad case of vertigo by eating a magic plant." ~ Jo Walton

What do you think of the characters we meet so far? Do you like any of them ... or dislike any of them? Does someone show up as particularly wonderful?

Please remember to include spoiler tags when discussing specifics.

I'd forgotten how much I enjoy this book until I read the first chapters again.

Aerin is just gritty. I have so much admiration for her as she deals with the 'hand' she has been dealt by life. She doesn't look like anyone else in the city and, being of pale skin and fiery red hair, she sort of sticks out from the rest of the Damarians who are of dark hair and skin. Being the daughter of someone who no one knows much about is difficult. What little she does know about her mother is, in effect, mostly rumours and slanders told her by someone who is jealous of Aerin's position as first sol. Galanna, someone who wishes she was first sol, or married to the first sol, manages to trick Aerin into eating something so toxic that it might have killed Aerin off. But Aerin doesn't die and does heal and then decides that she will make something of herself. She manages, with kindness and stubbornness, to gentle her father's heavily injured (and retired) war horse into accepting her. She trains him in a manner which no one thinks possible (ie bridleless and with just a pad for riding on). Then she does research for a very long time, to find a fire-proofing ointment. She does all these things in secret - with little or no support from most of those around her.

This section ends with sort of the bottom of the barrel of emotions for her, though. Much of what she is doing is good and working well; she is finally mostly healed from the surka poisoning but her whole project of finding a fire-proofing ointment seems at a standstill. So, even with Talat (the stallion) gaining in health and strength and Aerin herself doing so well, all of what she has been aiming at in her research still seems virtually impossible.

I'll admit, this book is very difficult for me to read. I've had to re-read everything twice, and I don't know if it's the long paragraphs that are at a constant or the typeface, but it gives me a headache and it's frustrating me. The story itself appears to be a good one, one that I would be into, but I'm finding it hard to get into.

I do like Aerin a lot. She's not like other girls and even though people are wary of her, she does what she wants. Her relationship with Talat is a lovely one, almost like they're helping each other in a way. I also like Aerin's determination and her curiosity in the old stories which I am assuming is what will eventually lead her on some great adventure. I am curious about her relationship with Tor and how or if that will develop.

Shiloh Adlar, Seventh Year
"Let us read, and let us dance; these two amusements will never do any harm to the world." -Voltaire
Top
Post Reply
3 posts • Page 1 of 1