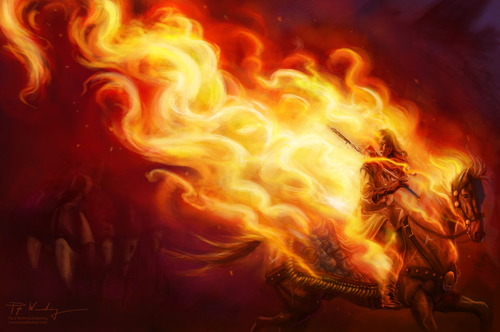 Graphic shows another rendition of Talat and Aerin being immersed in dragon flame. Vaguely seen in background are absolutely huge teeth - with partial view of the face of the dragon to which they belong. ~piyastudios

And here we are, back at the beginning of the story again -- but with all the gaps filled in. We know Aerin better now; what will she do? So much action takes places in the first chapter of this section and yet, the whole of the story is only half done. Did you have any idea of what would happen? We learn a lot more about kelar.

Remember to include spoiler tags, though, as not everyone might have read as far as you have.

Well, now the terror shows up. Oddly enough, though, it's sort of a resigned terror.

Sure, Aerin and Talat had gone dragon hunting before, but the sheer overwhelming difference between the dragons she's hunted (and killed) and Maur is like the difference between a candle flame and a toxic inferno made by madness.

Aerin was ready to dismount hastily if Maur was too much even for Talat's courage, for he had not had the warning she had had, and at least till the night before he must have believed that they went to fight a dragon like other dragons. But he stood, feet planted, and stared back at the dragon, and Maur's red eyes opened a little wider, and it began to grin a bit, and smoke seeped out between its teeth, which were as long as Talat's legs.

All that is in the first chapter of this section. Then, if possible (hard to believe), it gets even more exciting. The dragon is killed and ... supposedly the kingdom is saved. But Aerin is deathly ill, and she has to give attention to her dreams and leave the country in order to heal. This is so difficult to read, in a way, because part of her just wants to 'stop' and yet, part of her wants to continue on, to heal. So she and Talat leave, again, this time hopefully to heal. And that is when the infusion of magic into the story becomes so wonderful.

It has gotten easier for me to read now, and I am enjoying the book a lot more. The part with Maur happens so fast when I was thinking that would be the major climactic point of the book
It was written as much less than that in my opinion with an easy defeat, not much of a struggle compared to other books I've read. Then again, that's not actually what the book was leading to in the first place.

The part with Luthe is slightly confusing. My brain reads him as talking in circles and riddles, so I got a little lost again, but at least I was able to follow the part that Aerin's mother was a mage I suppose, as is her uncle, and a very powerful one at that in that he is going to destroy Damar. Maur was only a trial run for Aerin, and she finally has learned who she is. And in that time, became immortal. Again, this part happened so quickly that it was almost a slap in the face from one page to the next.

While the plot is interesting, the way the story is being told at times feels rushed and blurry. I probably, unfortunately, won't be reading The Blue Sword, and that saddens me greatly as I would like to know more about this land of Damar.

Shiloh Adlar, Seventh Year
"Let us read, and let us dance; these two amusements will never do any harm to the world." -Voltaire
Top
Post Reply
3 posts • Page 1 of 1